The Husqvarna 460 Rancher is a top-of-the-line model in a dozen ways. Housing a powerful engine and several ease-of-use features, it’s earned that designation many times over.

The centerpiece of the Husqvarna 460 is the engine. The same might be said of many Husqvarna models but it’s especially true here. This unit sports a 60.3 cc powerplant that delivers 3.62 HP and 3.4 Nm of torque at 7000 rpm. The engine will run up to 9000 rpm. That’s not the beefiest engine the company makes by any stretch, but it’s plenty to saw through just about anything in short order.

At the same time, the noise and vibration levels are not out of this world.

The shaking is a relatively modest 3.5 / 4.5 (ahv, eq) for the front and rear respectively. If you’re not familiar with those rating units they won’t mean much to you. Suffice to say, for all the power it puts out, you won’t endure excessive fatigue using this chainsaw. Not from the unit itself, at any rate. Sawing trees is hard work no matter how you look at it.

The noise level is another matter. The sound intensity isn’t outrageous: 104 dB(A) at your ear. That’s no more than average for a gas-powered chainsaw. Still, it’s equivalent to very loud rock music blasting from your speakers. Here, good ear protection gear is a must if you want to hear anything else clearly at the end of the day.

Fuel consumption is robust but not unreasonable at 437 g/kWh. The saw goes through about three tankfuls per cord of wood. Fortunately, there’s a good-sized tank – 14.88 fl oz – so you can get a lot of work in before having to refill. The oil tank is average: 0.7 US pints.

Luckily, it starts right up without undue effort. I like to put my muscles to work sawing, not starting. A single tug is enough in warm weather and only a few are required on those super-cold mornings. It helps that there’s an air purge mechanism. It allows you to remove air from the carburetor for easier startup.

The spark plug will last a good long time, too. After 10 gallons of pre-mix, it’s still on the original. It will last a couple of years if you take it out every few months and clean it, then check the gap.

The oiling system is imperfect, I’m sorry to say. The tank is not vented, so pressure builds up a bit over time. That can cause oil to leak past the pump and seep out. It’s a minor issue, and a minor mess, and hopefully Husqvarna will modify the design before you even read this to solve it. Still, it’s something to consider. 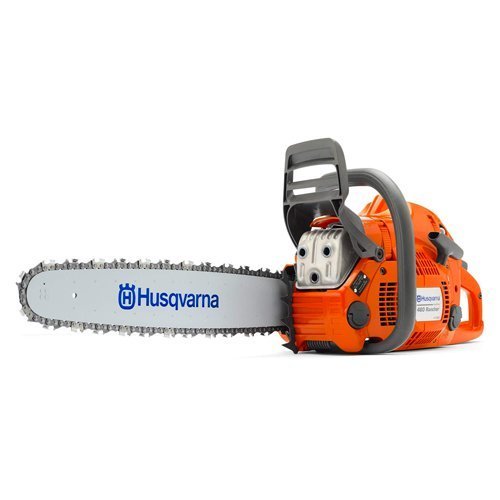 The Husqvarna 460 Rancher, like most models, allows for a wide range of bar / chain lengths. In this unit, that runs everywhere from a diminutive – and too small, in my view – 13 inches all the way to an ample 24-inch bar.

You can get by with something on the smaller end, of course. But if you’re going to spend this much to get the power and torque for the hard jobs, strapping it down with a small bar seems counterproductive. This chainsaw will easily take down a 12″-diameter tamarack. It can even tackle a 16″ wide oak without undue strain. So why hobble it with a bar that won’t go all the way through in one slice?

If those numbers seem off to you, keep in mind you want to saw at least 1/4 of the total from the end to minimize the odds of kickback. That doesn’t make that length a waste; you might use it for carving or other tasks under controlled conditions. But for felling, bucking, and trimming you need that “empty” length.

The bar cover design could be better. It tends to build up more sawdust than some other models. That creates the need to clean it out after about every cord’s worth of use. Still, that’s a fair amount of wood for the average homeowner and it’s likely to require cleaning before that anyway.

The bar is certainly easy to get off and on to reverse it. Not a bad idea, every once in a while. It helps make the chain wear more even. A couple of easy-to-reach bolts to loosen, then a worm screw to re-tighten the chain. Done.

Not including the bar / chain you select, the unit weighs 12.79 lbs. That’s hefty, though not ridiculously heavy. It’s pretty substantial by comparison to some electric chainsaws, to be sure. But for a moderate-sized gas model, it’s in the middle of the pack, though granting maybe on the high end of it.

In any case, that heft is always a tradeoff. Sure, you can get arm fatigue a little quicker if you’re not a guy with beefy biceps. (I’m not.) But I find it helps get through the thicker logs a little easier, since I can use the chainsaw’s weight as an aid. Instead of pressing down harder, I let the saw do the work. It makes quick work of turning 6-foot logs into 16-inch firewood, for example.

As these things go, a gas-powered chainsaw is always going to be more effort to maintain than an electric model. That said, the 460 Rancher is about as easy as these things get.

There’s a side-mounted chain tensioner to keep the thing snug but not too snug during your working session. The quick-release air filter is easy to pop out and in for cleaning or replacement.

On the downside, that sawdust buildup and oil leak mentioned above doesn’t help to keep this Rancher clean.

The Husqvarna 460 Rancher isn’t my personal favorite among gas-powered chainsaws. But that attitude depends as much on personal circumstances as on objective features. For some buyers, it would be overkill. For homeowners who want a near-pro level of power, bar size range, and durability, this could well turn out to be a favorite among them.