In the past, I was not a big fan of electric chainsaws. But technology advances and it’s hard not to love some of these new models.

The Worx WG303.1 is a great example. As powerful as a good gas model, and a whole lot quieter, it’s made me completely revise my view.

As with any chainsaw, the powerplant on the Worx WG303.1 is its most notable feature. That’s particularly true because this electric model sports a 14.5 amp motor that will generate 3.5 HP.

That’s more than an amply endowed gas-powered model like the Husqvarna 460 Rancher. With beef like that you can fell a 12″ tamarack without breaking a sweat – with the right bar and chain, of course.

The drawback is that the WG303.1 is a corded model. It runs on standard 120V-60Hz home electricity. It’s easy to run, true. But that cord limits your ability to work out in the middle of acreage (unless you’re eccentric enough to haul your portable generator out into the forest).

On the upside, that electric-driven style makes this chainsaw a good deal lighter than the average gas-powered model. At just 11 lbs, it’s lighter than that Husqvarna Rancher model mentioned above. That’s far from the lightest corded electric around, for sure. But those much lighter models have far less power. 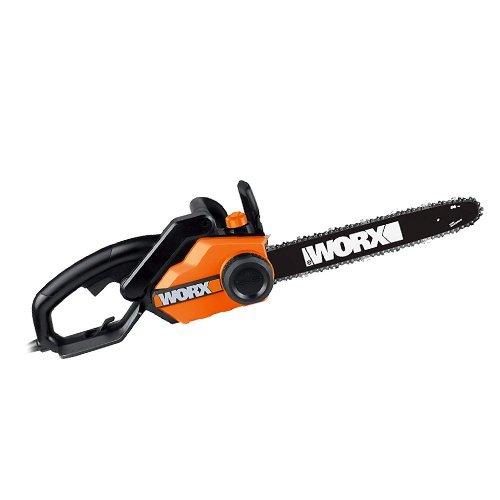 Whether the bar & chain on the WG303.1 is a drawback or an advantage depends to a large degree on your circumstances. It houses a 16 inch and, regrettably, that’s both the minimum and the maximum this model will permit. In short, this is the bar you use with this model and none other.

Frankly, that wouldn’t do in my situation. I have many smaller, thinner trees in the backyard that I need to trim and 16″ is overkill. On the other hand, that length is a little short for the larger cedars and tamaracks I have around the property.

If I were looking at this as an addition to my chainsaw set, I’d go for the Worx WG304.1 instead. It has more beef (4 HP) and offers a longer bar: 18 inches. Still, everyone’s circumstances are different and this medium-length does strike a good balance that will be ideal for many users.

There’s one other attribute that makes it clear the Worx designers intended this chainsaw for serious use, though. The dog at the base of the bar is all metal and well placed. The spikes hold firmly when slicing through a 10″ pine.

The chain pitch and gauge are fairly standard: 3/8″ and 0.50″, respectively. More proof that Worx was aiming this chainsaw at an audience that had real work to do.

At the same time, they clearly kept the homeowner or non-professional in mind; when equipped this way, the WG303.1 has less kickback. And when improper contact is made a built-in safety chain brake immediately stops the chain.

Fortunately, they also incorporated a tool-less tensioning system, just as you’d find on better gas-powered models. It’s great that they didn’t sacrifice ease of use to provide that near-pro level of performance.

It actually works better than it already sounds. Once set, the auto-tensioning system keeps it where you put it. And, novices don’t have to worry about accidentally over-tightening the chain.

There is one minor flaw in the design, however, from my perspective. The tensioning knob sticks out about an inch. If you’re trying to saw a stump off level with the ground that can be a problem. Still, that’s a pretty rare job to tackle with an electric and you can flip it over in most situations to eliminate even that limitation.

The handling ease of the WG303.1 is enhanced by some other nice touches. The rubberized rear handle gives it a nice feel. It’s more comfortable even than my trusty Stihl MS 250 gas model, which is about the same power and weight.

The ease of use is undermined by one feature: the bar-to-body shape and placement. If you tackle wood that’s a little too green wood chips will build up at the rear of the bar. Dry chips tend to fly out or be super-easy to remove. Wet chips, not so much.

That said, there is an automatic oiler for the overall bar/chain. Like any auto-oiler, it will provide continual lubrication during cutting, so that sprocket won’t need attention very often. The oil reservoir holds 6.75 oz, so you won’t need to fill it too often. There’s a clearly visible level indicator for when you do.

There’s one other nice feature about an electric that may not fit exactly into the “ease of use” section but it really doesn’t go smoothly elsewhere: location. That is, you can use this chainsaw some places you might be reluctant to use a gas-powered model.

If, for example, you have a smallish garage or workshed you want to use to slice up firewood, the WG303.1 works well. The lower noise level and – most especially – the absence of any exhaust fumes means you can fire this baby up in complete safety. Natch, you still want to use proper safety gear and procedures. But you won’t have to worry about the smell or carbon monoxide.

The Worx WG303.1 chainsaw wouldn’t be my first, or last, choice of an electric model. But it is lightweight and unusually powerful for this category. There are some design drawbacks but overall it feels good, works well, and will stand up to a lot of punishment.